Sharman was raised in the area where she still lives near Warwick in Queensland and has had contact with many of the local  Githabul and other people over her life. 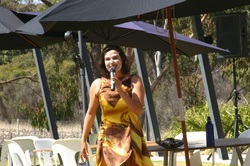 Education
She has a Bachelor of Indigenous Languages, from Charles Darwin University, and an Associate Diploma in Dance from the National Aboriginal and Islander Skills Development Association (NAISDA) in Sydney.
Learning tours to traditional communities as part of above education:
Turkey Creek, NT;
Central Desert, NT;
Torres Strait Islands; and

About Brenda
Brenda has been on a lifelong journey to discover the reason that in her otherwise white-skinned Scottish family, her grandmother, father and herself were dark-skinned. She has recently traced her great grandmother back to the Berry Estate near Nowra in coastal NSW where her convict Scottish ancestors worked side by side with the local Dharawal people. She has worked as the Community Education Counsellor (Indigenous) at Warwick High School and has been involved in Aboriginal issues for over forty years.

About David
David's ancestors came mainly from England and he has convict couples as ancestors on his father's  side. One was Henry Kable who was the convict who carried Captain Arthur Phillip ashore so he wouldn't get wet wen he landed at Sydney Cove in 1788 as leader of the British force which invaded Australia.  Both sides of the family lived around the Armidale area of NSW from the mid 1800s where some were relatively prosperous sheep graziers and so must have been part of the displacement of Aboriginal people. David grew up disappointed to realise that the Aboriginal people of Australia were largely ignored and disregarded by his fellow Australians of European ancestry. He has been involved in Aboriginal rights issues for over 40 years.

The photograph of Sharman dancing which is on our Cunningham Highway sign was taken by the late Ron Hildred. We thank his family for permission to use it.
Contact Brenda & David Parsons   Tel: 0459 655 648; Email: brendadavidp@gmail.com